Hello Revuers! It’s time for another exciting segment of Coloring Between the Lines. Where we interview a Color Artist who is making an impact in the industry today. This time we have the fantastic Mat Lopes with us. Mat was gracious enough to answer some of the burning questions we here at Deja.Revue had for him. Mat is among the elite in the game today working on such titles as Star-Lord annual and Batgirl. So without further ado.

Well, if you mean as a professional, the first time I published was in December of 2011, but my first paid, regular job was only in July of 2012, so I guess that makes a five years old career now. However, I think I’m coloring on my own since 2009.

No, I wanted to be soccer player, hahaha! As a Brazilian guy, I can say we’re not all soccer fanatics around here, but I most definitely am. Art came a little later in my life and for a long time I just thought of it as a hobby. I didn’t even know my job existed until I was 17 or so!

You know, I started reading comic books later than usual for a comic professional. I’m a 90’s kid and, in my childhood, mangá was so much popular and easier to find here that I only discovered comics as a teenager. I can’t remember exactly which series I got into, I just remember being blown away by a whole new universe and all those colors, so I just started read everything I could. But if I have to name some titles, definitely Spider-Man, X-Men, Batman and such.

Hard to say. I think right now I’m reading more other genres than superhero, but I love them both!

That’s a tough one! I actually don’t think I have one.

Hahah, that’s a little lame, but I gotta go with a comedy mangá called Love Hina. So funny!

First I get everything I have available and take a really good look at it. And by that I mean script, notes, concepts, references, pages etc.

After that, it depends. If we are starting something new, I really like to talk to the writer and artist and discuss about the book itself and everything that goes in it. It’s great to chat about the story, the genre, the rhythm, the approach of the art. I really try to understand what the artists and writers will be trying to say and find out how can I help to make it even clearer. That way I start to build my palette , my style of render and my whole approach in my head.

Once everything is clear to the whole team and me, I’ll send the pages to my flatters and after they’re done I start to work on the pages.

Of course many times we can’t have this whole process because of the deadline, or because it’s a fill in or just a one shot. In that case I’ll just see some references and go with my feeling.

Complementing last answer, I’ll have to consider the specificities of the scene: If it’s day or night, if it’s natural or artificial light, what’s the mood of the whole scene, what’s important to emphasize, the planes I have to separate. After figuring this all out, I have my palette!

Hahaha, I can’t choose that! One of the great things about being a colorist is to work with so many artists with different styles on different projects! So for me often is apples and oranges, and I love all of them.

Wow, there are so many great people out there, but I think some of my favorites today would be Dave Stewart, Justin Ponsor, Matt Wilson, Nathan Fairbarn and Elizabeth Breitweiser, not in any particular order!

Of course! But not just one person or even one medium. I get inspired by a lot of things, such films, paintings and illustrations of any kind or style. And of course, comics as well.

I tried to match Chris Wildgoose’s style for the render, so nothing too detailed. And since it’s a light, teen kinda of book, I keep a light and colorful palette for the most part of the story.

I don’t see much difference, to be honest. I mean, the editors who contact me know what kind of styles I usually do, and after we sort which directions we’re going, I have a lot of freedom on the book. Of course sometimes they ask for changes on certain things here and there, but I’d say that in 90% of the times their suggestions works very well and make my work look better!

I don’t know. I never tried to cultivate one style specifically; I always trained and studied very hard to match my colors with as many different art styles as possible. First because of the necessity: since I was trying to be a professional, in my head my chances would be better if I could color “everyone” in the industry. So while I practiced over artists like Ivan Reis and Eddy Barrows, I also tried to be a good match for guys like Rafael Albuquerque, Matteo Scalera and others. I think I learned a lot from never repeating the same style over the same artists. “My style” definitely came after I started to work regularly. With the experience I was acquiring I started to discover more about me as an artist, which things I was better at, what I liked doing the most, and that kind of thing. After that I think I just focused more on my “interest area”.

But you know, I still love coloring a lot of different styles! It’s like ice cream: my favorite may be chocolate, but that’s no reason not to taste all the other flavors! Hahah.

Next I’m going to ask you a series of Either Or questions. Ready? Ok, go!

I’ve never been on a US convention, so I can’t really tell! Hahah. In here they don’t usually have them.

Comic Con Experience, which happens in Brazil and it’s amazing!

I have some artist’s I’d love to work with, like Sean Murphy, Chris Samnee, Rafael Albuquerque, Olivier Coipel and Bilquis Evely. These last two I already worked with, but only on small stuff! I want to color so much more of them, hahaha.

I would probably work with technology, since that was what I was studying before my career on comics started to get on tracks. Programming, most likely.

Probably Robin (Damian) or Batgirl (Barbara Gordon), they have such cool costumes!

I think the creative team speaks louder to me than the series itself, but it would be really cool to work on Batman.

I think that more than tools for coloring, our digital age has given voice to the professionals behind a comic book. Suddenly  it’s a lot easier to hear from creators so it’s easier to follow them and their work, especially if they are united for a cause, like cover credits and royalties . I think it’s only natural to recognize and respect someone once they are not in the shadows anymore. But yeah, I’m not doing this for that long, but I can already tell the difference from when I started coloring, from fans to editors and even reviewers. Things are not perfect, but there is definitely an improvement regarding color artists (look, we are artists too, now!).

Yes! In fact, the only thing I’m working regularly that you can read right now is Batgirl, from DC. But a new series for Skybound just got announced, it’s called Gasolina and it’s written by Sean Mackiewicz with Niko Walter on the art duty and it will be coming out in Setember ! Also, I’m working on new project with the creators of The Electric Sublime, William Prince and Martín Morazzo. Finally, I’m also coloring a book for Marval that I cannot talk about it, but keep your eyes open, you’ll hear all about it very soon.

Thank you very much! 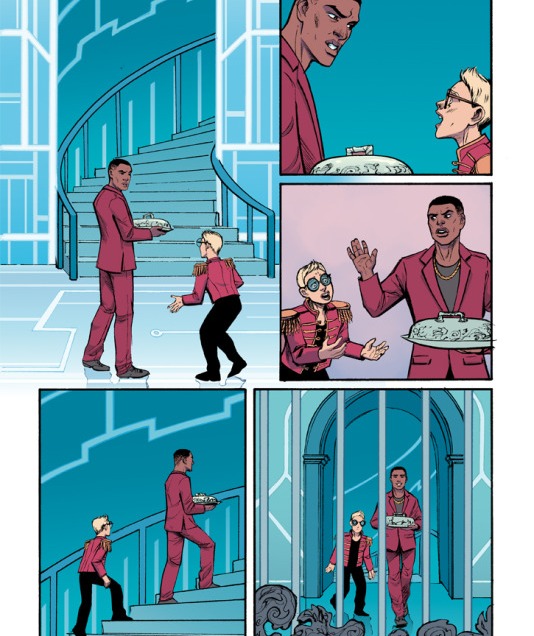 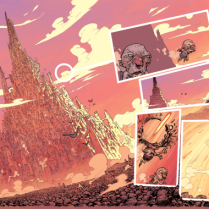