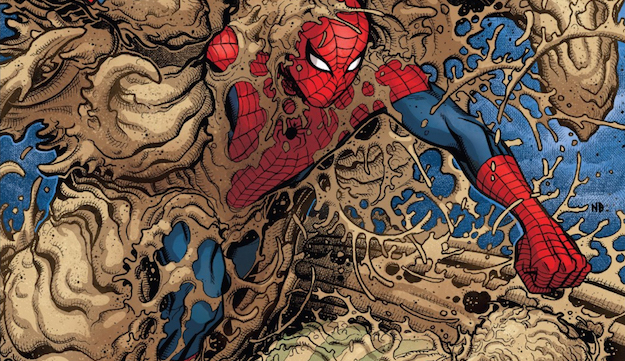 Hello Revuers! It’s the first Tales from the Pull List of the year! It’s hard to believe how quickly last year flew by. 2015 was a year of great comics and I hope that 2016 continues the greatness. If this weeks pull list is any indication then I’m not worried at all.

Pick of the Week

Spidey #2: This series sees the return of Peter Parker to high school. Writer Robbie Thompson does a great job of making this step back actually feel like a step forward. With old faces seeming fresh and old story’s seeming new. In this issue we see Spidey in a fight with Sandman and a tutoring session with Gwen Stacey (Stacey rules Mary Jane drooles). At the beginning of the issue we see Peter talking to Aunt May about his upcoming tutoring session and she tells him to “Just be yourself” which leaves our hero to ponder “Which version of myself” At first all the versions of himself seem bad, as like with most teenagers, he struggles with self-esteem. Spidey slowly realizes over the course of the issue that in the right situations all the things he thinks are bad about himself (nerdy, geeky, etc.) are actually strengths (except for being broke, that’s not a strength). This realization gives him confidence (and the inner monologue that works though this gives the reader plenty of opportunity for laugh out loud funny moments). Not only that but he finds out that his secret crush knows who Gandalf is, so…..that’s a win. The art by Nick Bradshaw is beyond perfect for this series. His version of the Sandman is perhaps the best I’ve ever seen. All in all Spidey is a fresh and fun take on Spider-Man that the other more dramatic Spider-Man (Amazing) is missing. Rating: 10/10

Doctor Strange #4: What grave peril is threatening the Sorcerer Supreme of all the dimensions? What can kill magic and old books? What’s the Chloric intake that Doctor Strange needs to command the mystical? All these questions are pondered in the fourth issue of this fantastic series (ok, maybe not that last one). Jason Aaron and Chris Bachalo gift the reader another action pact and visually stunning book. If you aren’t reading this series you really have to ask yourself why? Rating: 8/10

Invincible Iron Man #5: This issue continues where number four left off. A stand down between Iron Man Madame Masque…….and Doom? That’s right Victor appears to be on Tony’s side in this one. Although appearances aren’t to be trusted. Speaking of appearances, I wonder what caused the appearance change for Doom? Perhaps something from the end of Secret Wars? Rating: 8/10

Amazing Spider-Man #6: The other Spider-Man title that was released this week saw Peter Parker doing more Tony Stark things half way across the world. Be that as it may the return of a surprise villain and an interesting appearance of a fabled team of super heroes made this book interesting to read. Although a bit heavy for what I like in a Spider-Man book. Rating: 6/10