Welcome to October here at Deja.Revue. If you have not noticed already, I tend to be a fan of the creepy, the weird, and the left-field in comics. So I though October would be a perfect time to indulge those predilections even more than I already have. Horror, as a genre in comics, has always been just off to the side. Less flashy than superheroes, and something of a mutant child of crime comics, the genre has a breadth and depth which is, in my opinion, almost unmatched. I do not hope to cover the whole diverse range of the genre in the coming month, but I do hope to give you a survey of some of my favorite works on page and screen. If you would like to read further, Paste has an excellent list of horror comics you should read. For further reading on the history of horror comics, check out Mike Howlett’s essay in the back of this excellent horror anthology that I will not have the time or space to write about this month. If all goes according to plan, I will have a column each Monday for you, culminating, fittingly, with Halloween at the end of the month. Don’t forget to turn off the lights.

The designation of Hellboy II: The Golden Army as “horror” is dubious, to be sure. I will not spend the bulk of this article defending its inclusion in my run of horror-related pieces (and anyways, I will more than make up for this genre fraud next week), but I will say that the guiding hand of director Guillermo del Toro, along with the soul of the source material, are enough to merit an exploration of this film in the present context.

I have yet to write about the first Hellboy film directed by del Toro, and while I think one could jump into Hellboy II without seeing the first (a virtue of most comic book films 1978-2011), I would recommend seeing Hellboy because it’s a gem. The setup is fairly simple: the titular character is a world-ending demon from hell who ends up being raised by a kindly British professor and expert in the occult. As an adult, he works for the Bureau for Paranormal Research and Defense (B.P.R.D.) along with other agents with “enhanced talents.” Hellboy likes cats, beer, cigars, and the music of Tom Waits. Ron Perlman plays Hellboy in one of the great character/actor matches in all of film history. 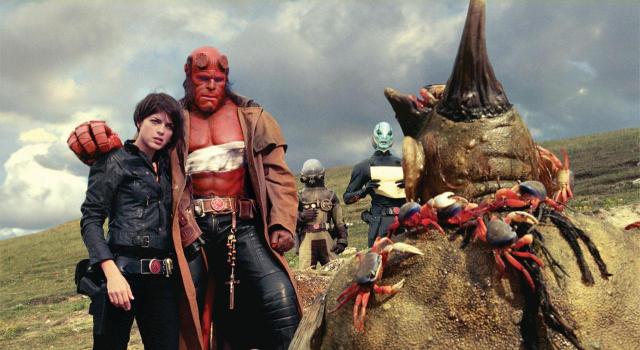 The plot of the film is not particularly important. There are ancient artifacts, a troll market, an abandoned underground city, a forest god. What makes this film distinctive is the meticulous, handcrafted nature of everything put on camera. Del Toro is famous for this. I might say that Hellboy is a better film than its sequel, but Hellboy II is a better film to look at. Every frame is stuffed to the edges with real things, intricate things. Every item in the film is something you could pick up and flip through, or open, or play with. The tactile, physical nature of the film extends to the enormous cast of creatures that populate the various set pieces. If you look far into the background, what you will see are extras in heavy costume and makeup, filling up a world so that we can be engulfed in it.

This is an old idea of horror – going back to the silent era – that mise en scène sets the mood, and plays a larger part than plot in building atmosphere and suspense. The sets of Hellboy II are lavish, but they range from the playful to the sinister. These are not merely dark places, but whole worlds unto themselves. 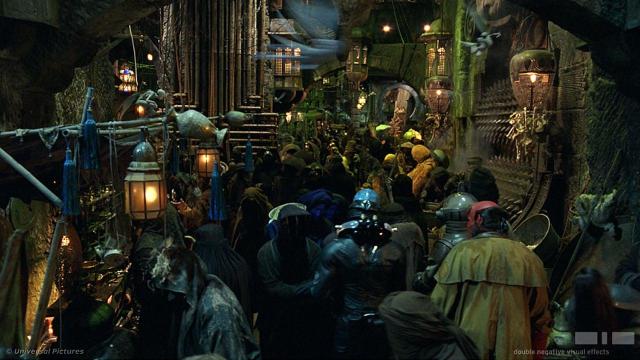 The playfulness of del Toro’s design spills over into the rest of the film. This movie is fun. And not in the way that a movie trying to be fun is fun, but in a genuinely, organically pleasurable way. The emotional beats are simple and build gently on the groundwork from the first film. They are effective because the actors never oversell them, and in fact, the film is more subdued than one might imagine. One of the film’s best moments involves Hellboy and Abe Sapien (a sort of mer-man who also works for the B.P.R.D.) lamenting their troubles in love over beers and singing along, gently, to Barry Manilow. It’s an unexpectedly warm and touching scene.

Couched in del Toro’s elaborate world, the characters’ dramas both big and small never feel silly playing out in such lovingly constructed environs. Hellboy and his girlfriend, Liz Sherman, a pyrokinetic, hash out their domestic problems in blazes of flame. Only later when they reach a shadowy chamber where one of del Toro’s more terrifying creatures (a dark angel with eyes dotting its wings) hands them their fate, do they put their arguments behind them and commit to each other for good. The small scale of the human drama could feel absurd in this fantasy world, but it doesn’t because del Toro and his actors treat the world with respect – they know how fragile it is, and things do threaten constantly to fall apart.

Hellboy II is a monster movie where the monsters are the bad guys and the good guys. Really, its not even that, because the good guys are fighting to subvert their own dark destinies, and the bad guys fight for what they believe to be a noble cause. But it still manages to be an excellent evocation of classic creature features, showing reverence to its references and giving care and attention to its own creations. We need more comic book films like this. We need more horror films like this. Hellboy II is not a perfect film, but it is a film undoubtedly assembled with love and passion by all involved. With all that care put on the screen, how could we not enjoy it?

5 thoughts on “Every Comic Book Movie (Ever): Hellboy II: The Golden Army”